Watch this orange juice commercial and try to figure out what the advertisers are trying to do:

This is the orange growers association's ad, so they're not pushing a particular brand. If you said that they were trying to remind you that orange juice is a thing, or to put a jingle in your head, or to get you to associate positive feelings with orange juice, those are all right answers. The answer I want to talk about though is one you may have missed: they want you to think you should drink juice out of a big glass.

Like any good Floridian, I used to drink juice out of big tall glasses like that. In college I could go through a gallon of orange juice in a day or two. I thought of it as a healthy alternative to soda. It tastes great, like soda, only it's natural. Then I got interested in my health and I learned that juice might as well be soda. (If you are reading this in a future controlled by Coca-Cola, there was a time when sugar water was considered unhealthy.) The University of Florida was, not surprisingly, a good place for this kind of development: they have an excellent campus interest in personal fitness. They also have an excellent food science division. They're the ones who invented Gatorade. Less well known, they invented concentrated orange juice in 1948.

After I left college and got a little bit of money in my pocket, I began eating at nice restaurants. Well, nice compared to Maui Teriyaki. I noticed something. They serve juice in small glasses. Glasses like these: 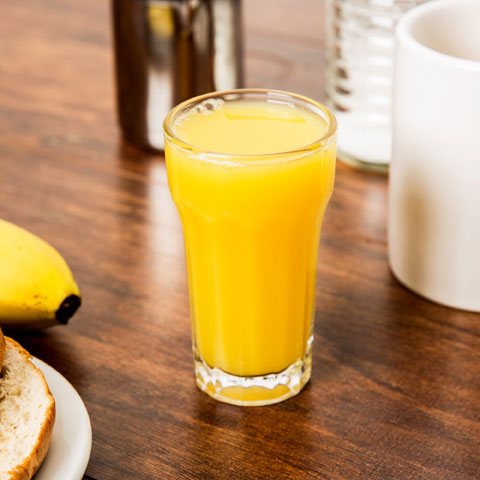 This is even called a "juice" glass. Of course. The juice glass is much more reasonable. You get all the flavor of the juice, which is really a strong food even at this size. Those of you who've hand-squeezed juice learned the hard way that a small juice glass still contains several oranges. If you look at historical advertisements—you have to go way back, to the 1920s or so—you'll see that people used to be depicted drinking out of these kinds of glasses. Some good examples are here: Vintage Ad Browser search (go through multiple pages).

As far as I can tell, nice restaurants have preserved the way we used to drink juice.

There could be a lot of reasons why we graduated from smaller to larger glasses. Maybe we were no longer constrained by the fresh-squeezed method for juice production (think juice concentrate). Or perhaps the cost of oranges went down (it's stayed about the same). Maybe consumers want to drink this much juice, only up to that point they were conditioned not to. Whatever the reason, orange growers helped the process along. The key evidence can be found preserved in the campaigns from around 1950, when it was necessary to explicitly tell people which size glass to use. 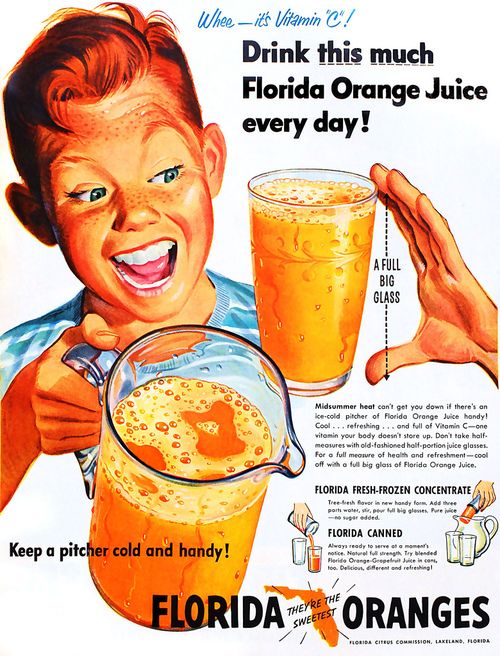 Advertisers pull this trick all the time. In the '90s De Beers advertised "The Diamond Engagement Ring: How else could 2 months salary last forever?"—Two months salary being a profligate amount for a man to spend. Regardless of profession. This fooled probably a lot of men into paying too much for a ring. All of us live in an information vacuum on some subjects. To this day if you ask an unmarried person what a ring should cost they'll probably tell you two months salary. Ads are there to fill in the empty space. 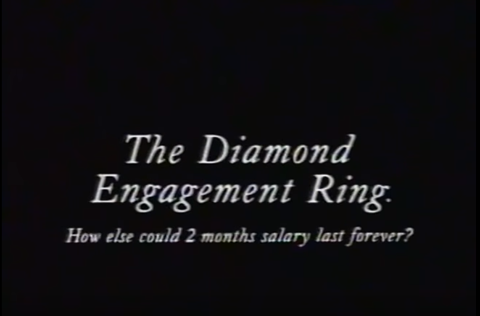 Most of us use too much washing detergent. Synthetic car oil lasts a lot longer, and the cautious among us are changing their oil too often. Somewhere out there a guy is shampooing his head twice because the bottle says so.

If you return from the frontier of what's known, purporting to have done the hard work of figuring things out, there's a good chance you'll influence opinion. Advertisers know I don't have the resources to run my own controlled trials. They even know I don't trust them to be honest. They merely need me to weigh what they tell me against me knowing nothing at all.