In the early days gold was just kind of lying around. On a lucky day at the river you might find some. If you tried to hit the gold you would notice it holds its shape. So you could make art out of it. Otherwise, you'd notice it's fairly useless. As soon as you needed something useful, like food, you'd trade the gold to a well-off guy. The well-off guy already has more than he needs, so what he's after is a novel experience. Like unusual art.

Gold is not useful, but it is unusual. That unusualness becomes desirable to people who have all their other needs met. Finding gold is a very good position to be in. Satisfied guys have a lot of stuff. You can trade the gold to the satisfied guy for pretty much anything else you need: skins, wine, grain. And those are all surplus goods to him, so he won't hold onto them too tight.

This starts the process that gives gold its value. If you can get the rich guy to take your trinket once, you might try to play the same trick again. That means returning to where you found the gold to look for more. And I wasn't kidding earlier when I said gold was lying around. If you can't find more in the riverbed, then following the river up the mountain is liable to take you to an exposed placer (rhymes with 'crasser'). A placer deposit is basically dirt that has gold in it. You can get it out just by digging, without any special tools. This is much better than threshing grain. With gold you can get pretty much anything you need from rich people. A side effect of this kind of exchange is that gold flows to rich people. Everybody would notice this happening.

Rich people played up this association. Having a bird made out of gold in your home is nice. Having everybody you come across see this thing is better. Carrying a decorative bird around is inconvenient, but you could hammer the bird into an armband and wear it. Now everyone can look at your gold. The visual link of jewelry solidifies gold's association with the rich. Gold advertises itself well. It becomes a status marker. Gold means rich. Rich means all the stuff rich people have. 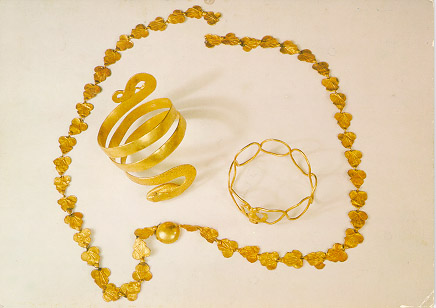 This kind of association turns gold into a big deal. If you're rich, your identity is tied up in it. Now this gold thing is personal. Power is rooted in perception. Not owning gold is bad optics. If a rich guy doesn't have gold, people are going to wonder about him.

Gah, I just wanted a bird! Now I have to worry about this new hobby of collecting gold. Since I'm rich, I'm probably strong too, so I might just take your gold instead of trading with you. Bad for business, but it happened. I might also put you in chains and send you to mine the gold for me. Also bad. Also happened. But on a good day, we could work something out. Unless I'm also in a stabbing mood, in which case stabbing. But on a regular good day...no, really, bring me the gold. We'll work something out.

As the rich guy grows in power, eventually his rich-guy hobby will result in a massive gold hoard.

This same hoarding scenario played out all over the world, because gold is deposited all over the world. Gold is still rare, but it's also everywhere, roughly speaking. It's geologically distributed like this because it leaves the interior of the Earth through volcanoes and other cracks. The Earth's surface has cracks all over it, so gold is all over it.

So far however, gold doesn't look like money. Exchanging gold is still something like barter. Gold is either fine art, or it's a fine art supply. Like a metal putty. It's still far away from actual money like coins, and not yet to a certain precursor to money called "proto-money." It'll have to take a few more steps.

This was Part 1 in a series. Part 2 is available here.