The following is a transcript of John Carmack's 2016 BAFTA Fellowship acceptance speech. 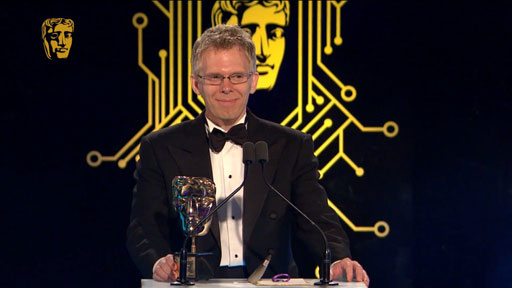 So, I'm an engineer, and, engineering usually involves a lot of fairly mundane things. You want your bridges that don't fall down, and your apps that don't crash and you don't really—you take pride in your craft but you don't really expect a whole lot of recognition or even understanding from most people about what it is that you do, but sometimes you have an opportunity to build something that's from the future and that's where things really do get exciting.

I make it a point not to romanticize the good ol' days because, as we've seen, things are amazing today, and we're not in some fallen state from a better time, but there is something to be said for the early days where you're working on a frontier, where you're doing things that people haven't done before and you don't know what the right answers are—before there's a top 100 list for a genre. The early days were of course very hard on the design side of things when I could say, "I can give you blocks and cardboard cutouts, can we figure out something that's still really great to do with this?" but with each hard-fought technical advancement, more and more doors opened, and the design-space broadened until we get to today, where, a strong team can take any crazy vision and turn it into a reality.

Now this is of course a wonderful thing for designers and for the people that play the games but I do hear sometimes from programmers that are kind of sad that they don't have the opportunity to write game engines from scratch like I did and have it matter, have it make an impact. And here's where some perspective really helps. I can remember when I was a teenager. I thought I had missed the golden age of 8-bit Apple II gaming, that I was never going to be Richard Garriott, and, time went by and I got to make my own marks in things after that, and in that time, I also see so many other opportunities that have come by. I mean, the 90's PC wave was great. I was happy to be there and I'm glad I took a swing and knocked one out of the park with that, but since then we've seen mobile games and web games, free-to-play games, the Steam Revolution, and now virtual reality. See, all of these are amazing.

So, yeah, the opportunities that I had aren't there for people today, but there are new and better ones and personally, I'm more excited about these than anything that's come before. So, thank you very much for this honor, but I'm just getting started.